In an environment with low yield interest rates, an investment in Williams (NYSE: WMB) would yield a very impressive return via its dividend; the current US 10-Year yield is 0.65% whereas the dividend return on Williams – given current stock price of $19.98 – is an impressive 7.60%. The company continues to compound its rate of growth in its dividend increasingly on an annual basis (currently at 18% over the past five years) despite a continuous decline in the price of natural gas, the company’s main product. This makes an investment in Williams an interesting prospect for those seeking long-term dividend payments.

Here is a look at its most recent chart: 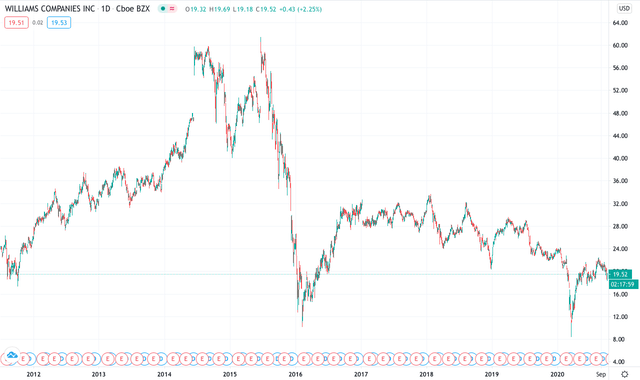 Typically, a low yield on the government interest rate would push other, in-kind investments, higher. If investors could get a 0.65% return on their money by investing in government bonds or a yield over 10x that at 7.6% with a dividend rate at $1.52, this makes for an easy consideration.

Because of the demand for higher yields, investors would be drawn towards this higher yield, pushing up the price of the stock (thereby narrowing the yield differential).

However, WMB stock has slowly trickled lower and lower (The COVID-induced sell-off of March, notwithstanding). This continual move lower, to me, is a potential opportunity. As the stock moves lower and lower, and as the company’s dividend continually increases, then the investment returns more and more.

The key variable is the price of natural gas, and its slow steady decline over the past few years: 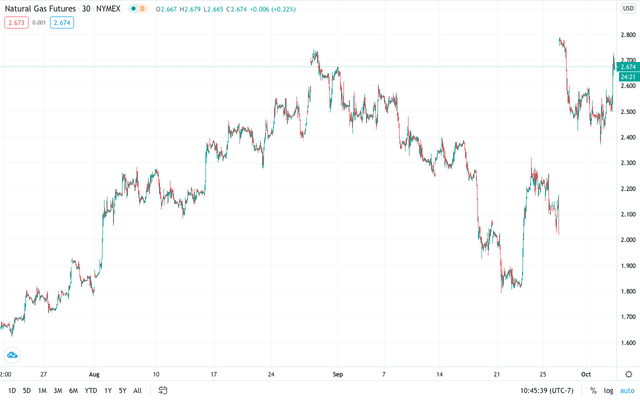 The world is awash in natural gas and other carbon-based energy products such as oil. This supply has helped to push down the price of gas. Interestingly, Williams’ growth rate shows a balance between the drop in the price of natural gas via its revenue and the company’s increase in EBITDA growth rate. Revenue Growth (YoY) was -9.32% whereas the EBITDA Growth (YoY) was 9.62%. EPS Diluted Growth was at 167.72% and the EPS Diluted Growth (FWD) was 12.2% for last year (The aforementioned 18% was compounded over the past five years.)

But the natural gas supply is the issue with which an investor should be concerned. Natural gas is a basic commodity. And, if there are oversupply issues, the price of natural gas could conceivably continue lower. This will ultimately pressure the company’s revenue, thereby potentially hurting the dividend rate.

Also, aside from oversupply concerns, there is the green energy movement. More and more, the price of renewable energy is getting less and less expensive. Coal, once a bastion of energy supply, is declining in use to the point where it is no longer a viable commodity for this. Both wind and solar power generation are less expensive than coal. If the pace continues with a declining price in renewable energy, then it may be that natural gas is shunned entirely for more cost-effective and greener options. This would be a massive problem for a company almost entirely dependent on delivery of natural gas. 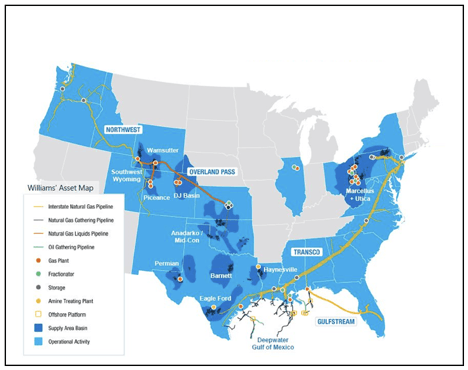 Williams’ reach into so many homes and businesses throughout the country makes this a very important company to the nation. However, even with a potential, sizable recession, Williams’ revenue would be affected only on a short-term basis as any turn of the economy would bring back revenues to pre-recession levels. This is typical for an energy company which is something that makes investment into an energy company more dependable; its ability to bounce back to pre-recession levels.

However, there is the continuous impact of the declining price of natural gas. Despite the future bounce-back of the economy post-COVID, the world is now awash with carbon-based energy, and the continuous push into green energy. This will be something that an investor will need to constantly monitor.

In its most recent investor presentation and conference call, management at Williams released information that it is going to begin a cost savings program that eventually may turn into a business pipeline. The company has announced it will begin to invest some $300M into green energy to help with cost savings benefiting the company directly. Then, should this benefit pay off, it will continue to expand this program with the eventuality that it will start to add energy into the grid.

What I like about this program is its baby steps instead of an all-in approach. The company knows that adding in some measures of green energy will bring down internal costs – thereby adding more to its bottom line. Then, as these objectives are achieved, the company can continue to expand this program until the eventuality that it is producing more and more to the grid and improving its bottom line while keeping in line with the rules requiring compliance of zero emissions.

Keep in mind the company’s main product is natural gas. As it makes this switch, the small steps it takes will be a long-term commitment that pays off more and more as the switch takes place. First, at the time of this writing, both solar and natural gas are coming in at about $0.06 per KwH from a cost point. But if the price of natural gas continues to decline, less and less effort will be made by the world energy producers to switch to solar. But that decline in price merely leads to increased demand, helping to buoy the price.

Eventually, however, a major portion of the world’s energy needs will be derived from green, renewable resources. As this occurs, Williams’ switch to these green options will solidify the company’s position of delivering energy to its customers. In the meantime, Williams holds a vital lock with its pipeline in delivering natural gas to the 30% of Americans that need it.

Another key issue that I have been focusing on in my articles, and by extension, my investments, is the downside risk of recent selling. The markets have come under increased pressure over the past couple of weeks. There has been a lot of uncertainty heading into the final stretch of the presidential election.

Here is a visual of what the market has been doing over the past year:

With the upcoming election, there is uncertainty as to who will win and the potential of an upset or a change of majority in the Senate and what that may mean for the economy moving forward. Given that, the broader market has sold off recently from all-time highs.

But potentially, any selling could be a major buying opportunity. With Williams, any moves lower in the stock, and if the company maintains the very same dividend, then the return to the stockholder improves. My expectation has been that with a new majority in the Senate as well as a new administration, that would mean that the government will successfully pass a stimulus bill thereby bolstering the economy. This would help the economy considerably and relieve the pressure on the markets.

There is a lot to like about this company; mostly its yield is the eye-catcher. Then once you look under the hood of this company, you see that there is a lot of long-term potential. The company continues to work towards cost savings in an environment where its key commodity is declining in price level, and in overall demand as more and more switch to greener and greener energy consumption. Yet, the company has not only maintained its dividend, it has managed to continually increase it by 18% on a compounded basis. Given the current yield of the US 10-Year, an investment with a solid customer base, such as Williams has, will produce long-term results worthy of consideration in any portfolio geared towards dividend yield.