Manfred Koppelman was one of the most successful copper traders in the world in the 1970s and 1980s. He ran base metals trading at Philipp Brothers, the world’s leading merchant and trading house that trained commodity legends like Marc Rich.

There were not many regulations in the over the counter and physical markets in the US and Europe in those days. Traders were free to use the capital at their disposal as tools to create and enhance trading and investment opportunities. Manfred moved stockpiles of copper and other base metals on and off warrant in warehouses on the London Metals Exchange. Making stocks visible and invisible at times caused price volatility as it gave the impression of developing gluts and shortages in the markets. Stockpiles in warehouses are a significant piece of the puzzle for traders and investors that conduct fundamental analysis.

The world has changed in Europe and the US over the past decades. Since the 2008 global financial crisis, the increased regulations have made it impossible for many traders to use their capital and trading muscles to manipulate prices. However, commodities are global assets, and there is a different set of rules of some market participants with a dominant position in the markets.

The recent move in the copper market is an example of the type of activities that have been around for decades but are now only available to a select group of market participants that do not have regulators breathing down their necks. The iShares MSCI Global Metals & Mining Producers ETF product (PICK) holds shares in many of the world’s leading base metals producing companies. The shares move higher and lower with the price of copper and the other metals that trade on the London Metals Exchange.

In mid-May 2020, copper stockpiles on the London Metals Exchange rose to over 280,000 metric tons. Since 2016, LME inventories have made a series of lower highs. 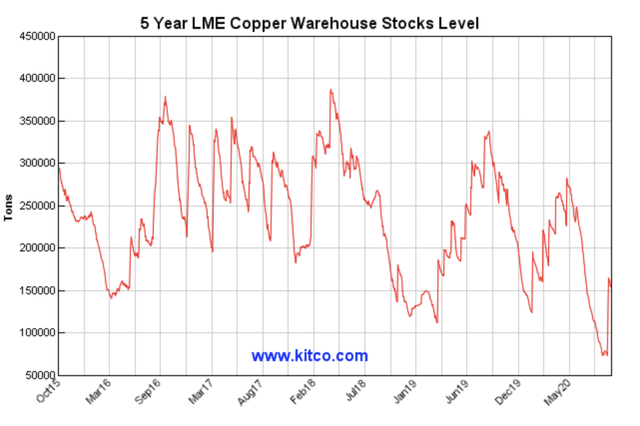 The chart shows that after a marginal new high in 2018 at over 370,000 tons in 2018, the trend in stocks has been lower. In May 2020, after reaching the 280,000 level, inventories fell steadily to a low of 73,625 tons in late September. In mid-May, nearby COMEX copper futures were trading below the $2.40 per pound level after falling to a low of $2.0595. When copper reached its low during the risk-off period caused by the global pandemic, LME inventories were rising.

When COMEX copper futures hit its most recent high of over $3.10 per pound in mid-September, LME stocks were heading for a low of below 74,000 tons. 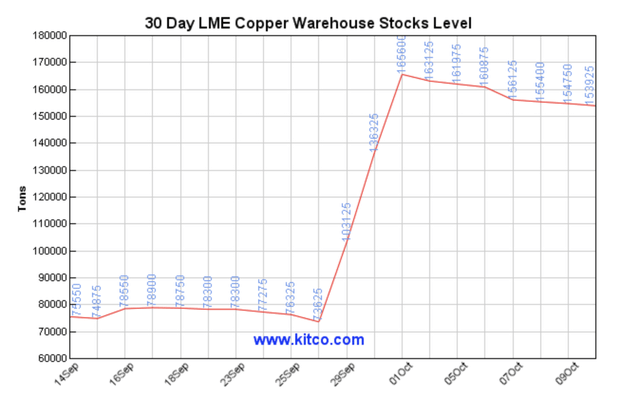 The chart shows that from September 27 through October 1, the amount of copper held in LME warehouses worldwide more than doubled from 73,625 to 165,600 tons. As of October 12, they stood at 152,975 tons, not far from the recent high. The high correlation between stockpile levels and the price of copper lead to a selloff in the copper market at the end of September.

A vicious selloff in the copper market

Copper had made higher lows and higher highs from the March bottom at just over $2 per pound to a high of $3.1210 on September 21.

The chart shows that the price of copper corrected to a low of $2.8345 on October 2. The plunge on October 1 that took COMEX copper futures from $3.0465 to a low of $2.8540 on the day that LME stockpiles hit the high of 165,600 metric tons. The correlation between prices and supplies was clear, raising the question if manipulation of stocks could lead to a favorable price move for a dominant market participant.

Over the past years, exchange consolidation caused the acquisition of many smaller exchanges by the leaders, the Chicago Mercantile Exchange (CME), and the Intercontinental Exchange (ICE). Operating an exchange in today’s technological environment with electronic platforms and increasing volumes became increasingly expensive. The acquisitions created economies of scale since the technology is applicable from one exchange to the other.

The London Metals Exchange was one of the world’s oldest. In 2012, the Hong Kong Exchanges & Clearing, a Chinese company, won a bidding war to purchase the LME for 1.4 billion pounds. The CME and ICE were active in the bidding process. China is the world’s leading consumer of the base metals traded at the LME. The London exchange offers forward contracts in copper, aluminum, nickel, lead, zinc, and tin, along with other metals. The most populous nation with the world’s second-leading economy purchased the LME.

Tampering with the mechanism

Before the regulatory environment in the US and Europe changed in the aftermath of the 2008 global financial crisis, oversight in the commodities asset class was far looser than it is today. It was commonplace practice for leading dominant traders with access to capital to move metals like copper and the others traded on the LME in and out of warehouses to cause sudden changes in visible inventories. The process amounted to manipulating prices as they tend to fall when supplies rise and vice versa.

Manfred Koppelman, who took substantial risks in the copper and other nonferrous metals markets, referred to using stockpiles to influence prices as tampering with the mechanism. It would be naïve to believe that Chinese traders, who are often not supervised and under the same regulatory umbrella as traders in the US and Europe, would not tamper with the mechanism to achieve financial and supply goals.

The sudden increase in stocks that sent the price of copper below $2.85 per pound resulted in substantial buying. On October 7, under one week after the red metal reached its low on October 2, the price was back over $3 per pound, even though copper stocks remained near the recent high. It is likely that inventories moved from invisible to visible status, pushed the price lower, where the world’s leading consumer took advantage of the price dip.

While the price action and stockpile movements in the copper market at the end of September and early October has the aroma of significant manipulation, it reveals the robust demand for the red metal. The decline likely caused some speculators holding long positions to exit the market; the dominant forces in the world of copper probably took full advantage of the price dip.

In September, a representative for Goldman Sachs said that copper remains the firm’s “favorite” commodity based on cyclical and structural support and ongoing supply issues. Bank of America pointed out that copper mine supply has been declining, while refined supplies have increased. They suggested that the divergence is not sustainable, given the link between the two.

Copper is a leader in the commodities asset class. The other metals that trade on the LME tend to follow the price of copper higher and lower. Those who read my pieces know that I believe central bank policy and government stimulus are setting the stage for a significant bull market in the raw materials markets. After falling to a low of $1.2475 during the 2008 global financial crisis, the price of the nonferrous metal rose to a record high of $4.6495 per pound in 2011. I believe that 2008 is a model for 2020 and the coming years as the levels of liquidity and stimulus are far higher this year than a dozen years ago.

Companies that produce copper and other base metals will thrive during a bull market. The top holdings and fund summary of the iShares MSCI Global Metals & Mining Producers ETF product (PICK) include:

PICK holds shares in the leading copper and base metal producing companies worldwide. PICK has net assets of $186.03 million, trades an average of over 160,000 shares each day, and charges a 0.39% expense ratio. The ETF product has a blended yield of 3.05%, reflecting the dividends paid by the shares it owns. 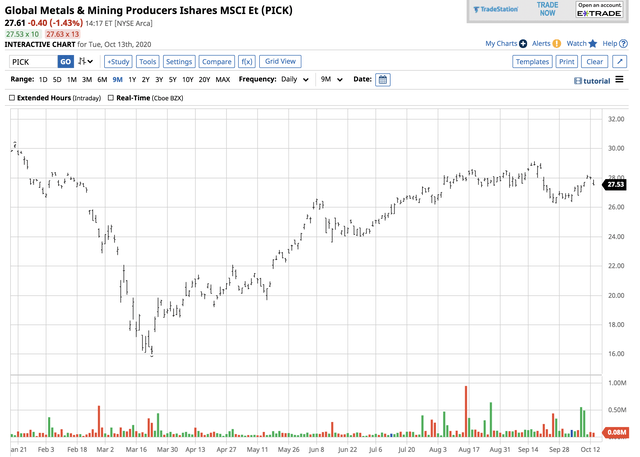 In an article I published on September 28, I suggested buying PICK on a scale-down basis below $27 per share. The shares fell to a low of $26.36 on October 2 and rose to a high of $28.20 on October 9. I continue to believe that the PICK ETF product has significant upside potential over the coming months and years. The most recent price action in copper after the change in stockpiles only makes me more bullish for the raw materials that are the building blocks of infrastructure in China and worldwide.

The Hecht Commodity Report is one of the most comprehensive commodities reports available today from the #2 ranked author in both commodities and precious metals. My weekly report covers the market movements of 20 different commodities and provides bullish, bearish and neutral calls; directional trading recommendations, and actionable ideas for traders. I just reworked the report to make it very actionable!

Additional disclosure: The author always has positions in commodities markets in futures, options, ETF/ETN products, and commodity equities. These long and short positions tend to change on an intraday basis.