For the stock market to go up, money must flow in from somewhere. Broadly speaking, there are three “somewheres” that money can come from: money market fund holdings (the Fed’s QE operations is part of this category), bank loans (private bank-created money), and the monetary sovereign government (Treasury budget deficits). In this piece, we check up on these sources of funds.

The Treasury’s daily budget statement (chart below) continues to show a deficit despite the September tax take which reduced the 20-day average from ~$17B/day down to ~$11B/day. The automatic stabilizers of UI and medicare/medicaid have functioned to provide fiscal support to the economy (as designed). For fiscal-year 2019, the deficit was $975B, while this year it is $2,719B; a 180% increase in the deficit! That is the main reason we are not in a system-wide depression. Certain parts of the economy are in a depression, but overall, and especially the stock market, the unprecedented amount of money creation has averted a general economic collapse.

The money spent into the economy by the Treasury comes out of the Treasury Cash Balance (TCB). In late August, and again in mid-September, the TCB took in $100B more than it spent out, causing weakness in the SPX on both occasions. If the decrease in the TCB that we saw this past week continues, then the SPX is likely to strengthen (chart below).

Private bank credit (loan creation) has gone down for the latest 2-weeks ending September 16; down by $58B (chart below).

That means that $58B was cancelled when the loans were repaid. Debt continues to be paid down, and this currency destruction does not help strengthen the stock market. However, lower debt levels provide for future spending and growth in the economy (chart below).

The SOMA (the Federal Reserve System’s Open Market Account) balance sheet was reduced in June and then held steady until a couple of weeks ago. In the latest two weeks, it has started to grow again at the promised rate of $120B/month; the Fed in its latest statement committed to buying outright $120B of MBS and Treasury securities each month. While this is not “new” money (it is an asset swap), it is liquidity that becomes available to the stock market instead of being sequestered in money market instruments (chart below). 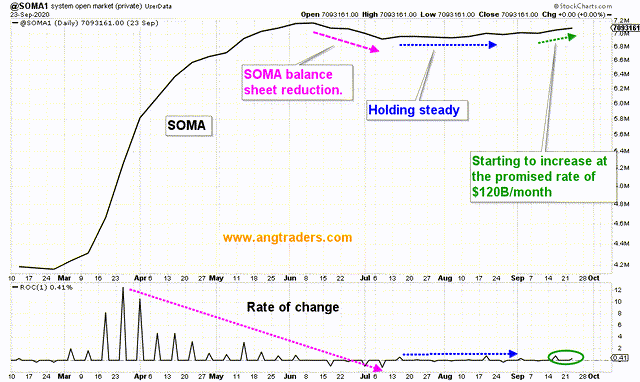 As of the latest reporting week, ending Sep. 14, ~$330B moved out of the money markets. This represents only 30% of the money that was taken out of the stock market and moved into the money funds during the corona-collapse. That leaves 70% of the sequestered funds still to be deployed in the stock market, which means that when combined with the $1.6T of spending power sitting in the TCB, there is plenty of money available to push the bull market to new highs (chart below). 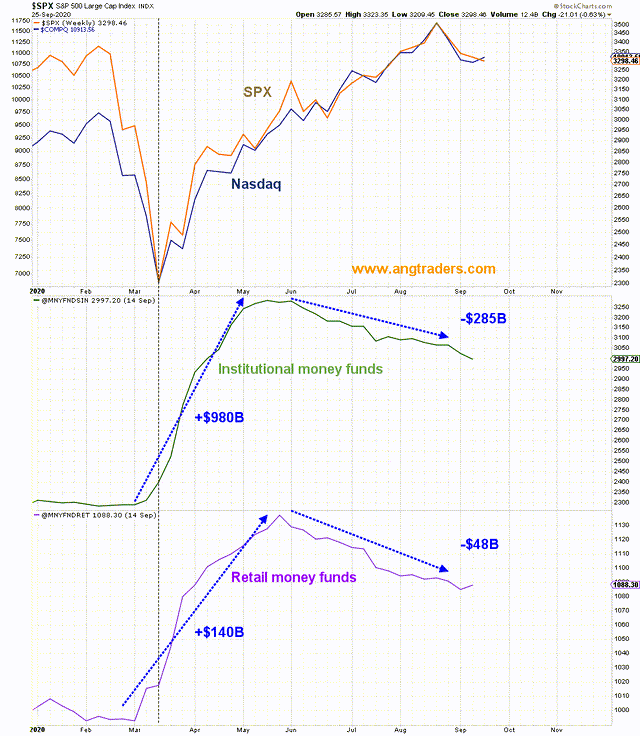 The past month-long correction was technical in nature, not fundamental; there is too much money still sitting on the sidelines for this to be the start of a bear market.

“I am SO VERY thankful for the discovery of this site, and the wisdom and knowledge I have gained... “

“I have not seen this type of analysis anywhere else. Please keep up the awesome work! – James”

“Happy ANG subscriber here. I believe them to be the best broad market analysts on seeking alpha.”

“Best here in seeking alpha…@ANG Traders . Best of the best!“

Take advantage of our 14-day free trial and stay on the right side of the market and Away From the Herd.