At first glance, Crimson Wine Group (OTCQB:CWGL) seems like an attractive off-the-radar investment. This California winery operation trades on the pink sheets and has little institutional following. Yet, with some of its properties being an easy drive from San Francisco and other West Coast hubs, it should benefit from having in-demand land near some of America’s most prosperous urban regions.

Since Crimson was spun off in 2013 from Leucadia, the stock hasn’t done much. Through 2017, the stock steadily traded right around book value, with minimal volatility. Since 2018, however, shares have steadily traded lower, and are now down more than 50% from their all-time highs. Notably, shares have continued lower this fall, and have now dropped below the March ’20 crash lows:

There are three distinct factors causing Crimson stock to underperform:

Let’s start with the first point. If you’re unfamiliar, Crimson ultimately began in 2000, when the old investment firm Leucadia purchased a stake in some wineries. Over the years, Leucadia continued collecting vineyard assets as part of its basket of diversified holdings that would benefit from an eventual surge in inflation.

In its 2010 annual letter, Leucadia acknowledged the difficulty in getting much in the way of profits from a U.S. winery:

“We repeat our mantra on the wine industry: Even in good times, it is difficult to make estate wineries profitable, though as real estate investments they are good inflation hedges. The entire industry suffers from oversupply and intense competition from home and abroad.

The sheer number of brands, combined with owners having to sell out last year’s vintage at (or below) cost, is a constant anchor on price. Estate wineries have high fixed costs and require large marketing dollars, making volume the key profit driver. We need more volume to make our goal of consistent, yearly cash flows a reality.”

Those words would prove prophetic. Here we are 10 years later, and the Leucadia wine assets are still failing to produce profits consistently. There was a change along the way, though.

As Leucadia’s operators grew older, it was time to redesign that business. They ultimately ended up merging with investment bank Jefferies (JEF). Meanwhile, non-core assets such as the wine assets needed to go in order to slim down the new firm. Thus, Leucadia spun off the vineyards into the Crimson Wine Group in 2013.

Until recently, Crimson Wine Group retained a fairly loyal shareholder base. Leucadia was, in some ways, a mini-Berkshire Hathaway (BRK.A) (BRK.B) and shareholders trusted in their managers’ judgment. However, as the years drag on and Crimson fails to establish any operational traction, it appears that long-time holders are capitulating, particularly as California keeps getting smacked by increasingly dire wildfires.

It’s not hard to hold onto a middling operational company if it has great assets. But Crimson can’t even match that level — its results over the past decade have been acidic: 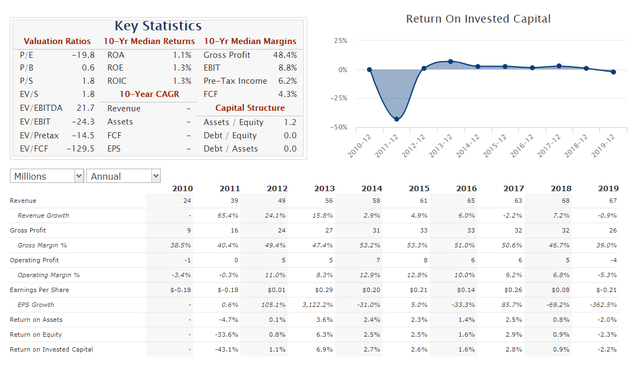 Over the past five years, revenues have grown more slowly than inflation, return on equity has never topped 3%, and the company’s gross profits and gross margin have declined sharply.

The company, which was never an earnings powerhouse, has earned no more than 26 cents per share even in its best year recently (2017). Even if the company got back to peak profitability — which seems unlikely anytime soon — it’d still be selling at 19x earnings. In 2018, profits dropped to just 8 cents per share, and the company lost money outright in 2019.

On top of that, larger losses should be expected for 2020 and 2021 given the terrible year the industry is having with wine sales diving and the market experiencing a historic glut of grapes.

Simply put, if a company like Crimson can only earn 26 cents a share in the best of times, and outright loses money during industry downturns, the stock isn’t worth a whole lot on a P/E basis. The old $8 price (31x peak earnings) made little sense, and even this one is steep based on repeatable operating earnings. However, there’s also land value, which is a more compelling bull argument to consider — we’ll get there in a minute.

First though, on the fires. As of October 6th, Crimson posted a statement saying that its business has not been immediately impacted by the fires, though there may be lingering smoke issues:

We are pleased to report that all of our employees are safe, and our physical assets have not been impacted by the recent wild fires on the west coast. Crimson Wine Group remains steadfast in its commitment to produce wines that meet the highest standards of quality. As this year’s harvest proceeds, we are following best practices, including rigid testing and analysis, in determining the potential impact of smoke taint.

Still, this was the biggest year of California fires on record, topping the previous burn acreage by double. And, for what it’s worth, the 2017 round of wildfires came close to Crimson’s land as well and caused significant damage for the California winery industry as a whole. Over the longer term, investors may reappraise their values for Napa land if there’s a considerable chance of those properties regularly being in a burn zone or having the grapes damaged by smoke from nearby fires.

A Land Play, Not An Earnings One

This brings us to the other side of the bull case for Crimson. Sure, the company doesn’t earn much money even in good times and won’t be making profits for the foreseeable future. But the stock price greatly undervalues the company’s land, right?

From looking at the balance sheet, we see $186 million of property, plant, and equipment. After depreciation, they have $117 million of these assets. However, land tends to increase in value over time, not the opposite — and that’s certainly been true in Napa. Bulls can argue that the true value of Crimson’s land is closer to $200 million (just the land, not including inventory, operating profits, cash, etc.). With a market cap of $115 million now, it’s attractive to buy $200 million or so of land, right?

Yes and no. I originally wrote back in 2016 that Crimson was a value trap in part because:

Sure, there’s potentially a land play in Crimson, as somebody could buy properties off them at even higher prices. But I don’t see that as an attractive investment set-up. Unless something comes along that catalyzes land prices, I expect Crimson shares to trade flat, or worse, as investors grow tired of owning shares that trade at a high valuation, offer falling earnings, and don’t provide any dividend whatsoever.

So far, that’s been the right call. However, at some point, the price gets cheap enough that the calculus reverses. Back in 2016, the stock was trading around book value. Since then book value rose a little bit more and is now marginally falling as the company has become loss-making. Yet over this same stretch, the stock is down 40%:

Book value has consistently been in the $8-$9/share range, meanwhile the stock is down from $8 to $5. There’s a pretty big difference between 1x book value and 0.6x book value when buying stagnant assets.

And, I’d agree, the bulls are right that book value understates the value of the company’s assets. As with many agriculture companies, land is held at cost, even though the market value of the land generally increases over time thanks to inflation, rising demand, and encroaching urban development allowing chances to reposition agricultural land for apartments or other higher uses.

According to this prior bullish article on Crimson Wine, land value in Napa has appreciated from $1,000/acre in the 1950s to around a quarter of a million dollars per acre in 2013. There were some unique conditions that led to this stunning performance, however, it’s not hard to imagine Napa land moving even higher in the future in a scenario where inflation roars back to life.

In any case, that prior bullish article valued Crimson’s raw land at nearly $7/share and had an overall price target of around $12 factoring in the additional value of wine inventory, land improvements, operating earnings, and so on.

Given how earnings have subsequently disappeared and the California wine market is in a nasty glut, I’d haircut a lot of those other assets pretty heavily. The argument for the land itself being worth $7/share makes sense though. And, I imagine, fires or no fires, eventually Napa land will continue to trade higher. Great agricultural properties that close to the nation’s most dynamic entrepreneurial engine is bound to be a good long-term idea.

The question is, though, what is $7/share of land worth if there are no plans to monetize the hard assets, and running it in its current form (to make wine) doesn’t produce profits? As long as management doesn’t go crazy with SG&A expenses, the actual value of the company should rise over time at least with the inflation rate and perhaps a little faster if the company can return to producing modest profits in the future.

At a $5 entry point, I can make a case for owning this as a pure inflation hedge. Put it in the set it and forget it category, as you would with physical gold or silver. It won’t produce any near-term dividends or economic benefit, but one day some unexpected event might cause it to suddenly rerate significantly higher. And at this starting point, I do think you’re getting a wildfires discount. Up until the 2017 fires, Crimson Wine consistently traded right around book value:

I could easily see the stock moving back to at least 0.8x book value once the fires die down and the pandemic passes, allowing restaurants to reopen.

While the alcohol industry has done alright with bars and restaurants shut down, the loss of in-person dining has hit wine harder than most other alcoholic beverages. As MarketWatch explained about the effect of the lockdowns:

“When you add both the shutdowns of tasting rooms and closures of restaurants, 44% of sales fell out from underneath the wineries in one night,” Rob McMillan, an executive vice president and founder of Silicon Valley Bank’s wine division, told MarketWatch.

2020 really has been a perfect storm for the domestic wine industry. As such, sentiment can pretty much only go up from here.

That said, let’s not get carried away here. Crimson has produced a 1% return on equity and 4% median free cash flow yield over the past 10 years. This is a lousy operating business even in normal times.

The best outcome for shareholders here is the business being sold for parts or acquired outright. Until some activist investor comes along to shake the box, there’s a good chance CWGL stock languishes in the $6-$8 range for many years more. That said, you might be able to make some money buying at $4.90 now — and there’s certainly worse inflation hedges as far as the land banks go.

If you enjoyed this, consider Ian’s Insider Corner to enjoy access to similar initiation reports for all the new stocks that we buy. Membership also includes an active chat room, weekly updates, and my responses to your questions.

Disclosure: I am/we are long BRK.B. I wrote this article myself, and it expresses my own opinions. I am not receiving compensation for it (other than from Seeking Alpha). I have no business relationship with any company whose stock is mentioned in this article.