ConocoPhillips COP recently provided some preliminary operational and financial updates for the September quarter of 2020. The company is scheduled to report third-quarter results on Oct 29. It also provided encouraging information regarding the share repurchase program.

ConocoPhillips’ third-quarter overall production is estimated in the range of 1,050-1,070 thousand barrels of oil equivalent per day (MBoe/d), excluding Libya. The company reported production of 1,366 MBoe/d in the year-ago quarter. However, the expected figure indicates a sequential rise from 981 MBoe/d. Third-quarter Libya production is expected to be 1 MBoe/d.

On a net basis, production curtailment for the quarter was around 90 MBoe/d. Due to low oil prices and an oversupplied market, the company opted for volume curtailments. Also, planned seasonal turnaround activities affected production volumes. However, improvement in oil prices in the past few months enabled the company to restart most of the paused productions. By third quarter-end, it fully restored Lower 48, Alaska and Canada productions.

In the third quarter, production curtailment in the Lower 48 was 65 MBoe/d, while the same was 15 MBoe/d in the Surmont operation in Canada. The remaining curtailments were from Malaysia and Norway operations.

The company expects third-quarter average realized prices in the range of $30-$32 per Boe, indicating a decline from the year-ago level of $47.07. However, the estimated figure signals an improvement from the second-quarter level of $23.09 per Boe.

ConocoPhillips expects average realized price for crude oil in the band of $39-$40 per barrel for the third quarter, indicating a decline from $59.57 in the year-ago period. However, the figure suggests a sequential rise from $25.10 per barrel in the second quarter.

Average realized price for natural gas is expected within $2.60-$2.80 per thousand cubic feet (Mcf), indicating a decline from the year-ago figure of $4.74. Moreover, it signals a sequential decrease from $3.22 per Mcf.

Moreover, the company plans to resume share repurchases of $1 billion in the fourth quarter, following a five-month hiatus. It will use the cash available on the balance sheet to fund the stock buybacks. Earlier, it slowed down the pace of the 2020 stock buy-back program due to market uncertainties. As of Jun 30, 2020, the company had $2,907 million in total cash and cash equivalents.

Its shares have declined 3% in the past six months compared with 0.3% fall of the industry it belongs to. 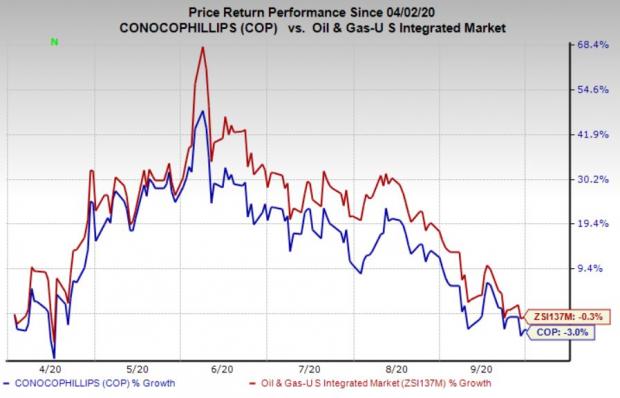 From thousands of stocks, 5 Zacks experts each picked their favorite to gain +100% or more in months to come. From those 5, Zacks Director of Research, SherazMian hand-picks one to have the most explosive upside of all.

With users in 180 countries and soaring revenues, it’s set to thrive on remote working long after the pandemic ends. No wonder it recently offered a stunning $600 million stock buy-back plan.

The sky’s the limit for this emerging tech giant. And the earlier you get in, the greater your potential gain.