Comtech Telecommunications (NASDAQ:CMTL) dropped 60% during the sell-off back in March, and the stock has never recovered. The company is in the middle of two acquisitions which have yet to close, but the company’s core businesses are strong. The stock appears to be a bargain, and the company is taking advantage of that fact by announcing a $100 million stock buyback. 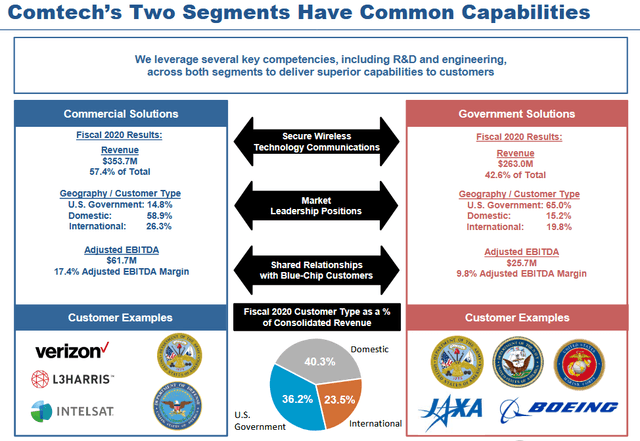 As can be seen in the graphic above, the Commercial Solutions is the largest of the two segments, and while the US government is a big customer, Comtech’s international revenue accounts for 23.5% of the total. So, the business is nicely diversified and has several large tier-1 customers.

In January, Comtech announced an agreement to acquire Israeli Gilat Satellite Networks (GILT) for $532.5 million. Israel-based Gilat is a global leader in the satellite ground station and in-flight connectivity markets and has expertise in operating large networks.

The plan to acquire Gilat came after Comtech announced a much smaller deal to acquire Canadian company UHP Networks for ~$40 million in November of last year. UHP has developed an innovative technology that is disrupting and transforming the Very Small Aperture Terminal (“VSAT”) market.

Of the two deals, clearly, the Gilat deal is the more impactful. CMTL stock dropped almost 20% in January when the deal was announced. After all, a $532.5 million acquisition would be a relatively big matzo ball for Comtech to swallow, considering, at the time of the announcement, it had a market cap of an estimated $925 million.

In addition, there are some complications with both deals regarding assets in the Russian Federation. These were itemized in the Q4 presentation, and the graphic below shows all the acquisition-related developments: 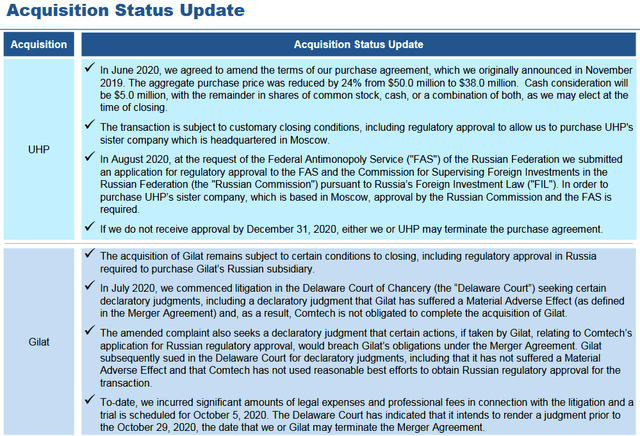 With respect to UHP, the main talking points are a reduction in the purchase price of ~24% and an agreement that either company can terminate the agreement if approvals (including from the Russian Federation) are not received by year-end.

The Gilat deal also requires approval from the Russian Federation. In addition, Comtech began litigation seeking a judgement regarding because it believes Gilat has suffered a “Material Adverse Effect”, and therefore, it is not obligated to complete the deal. Gilat has counter-sued. As a result, Comtech has suffered “significant” legal expenses, while the Delaware Court is expected to fast-track the legal battle and render a judgement by October 29, 2020, the date that either Comtech or Gilat can terminate the merger agreement. 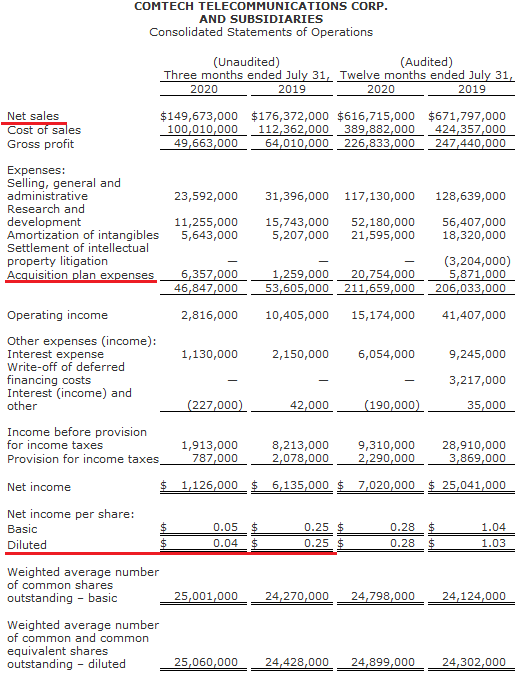 As can be seen in the graphic, Comtech got hit with a one-two punch – significantly lower revenues (primarily the result of COVID-19 impacts to its businesses) and sky-rocketing “acquisition plan expenses”. In the Q4 release, Comtech said:

As for Gilat, note its stock has plummeted after a big pop in January when the deal was announced: 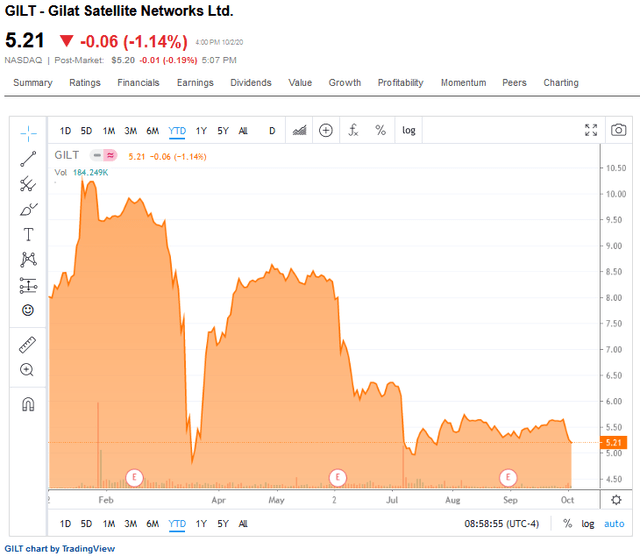 The COVID-19 pandemic continued to affect Gilat’s second quarter 2020 results, as we continued to see postponements and delays in orders. However, during the second quarter we began to see and are continuing to see a recovery in most of our areas of operations which is demonstrated by a significant increase in pipeline opportunities. We believe that as a result of these trends, coupled with the cost reduction initiatives we have executed and are continuing to execute, the second half of 2020 will be meaningfully better than the first half, for Gilat.

Since then, Gilat has logged some multi-million dollar cellular backhaul deals (see here and a $10 million 5-year deal here).

Despite the legal entanglements, there are signs of strength in the underlying businesses. Comtech’s backlog at year end was $620.9 million, and the company said,

“When adding Comtech’s backlog and the total unfunded value of multi-year contracts that Comtech has received and for which it expects future orders, its revenue visibility approximates $1.0 billion. A number of large potential contract awards are pending.” CMTL also expects 2021 adjusted EBITDA will be slightly higher than in fiscal 2020.

Indeed, after the close of the quarter, Comtech has announced several large orders, including:

The bottom line is, the backlog is relatively strong, and order flow continues to be strong and steady.

As a result of the stock’s drop and the company’s ongoing operations, Comtech announced a $100 million stock buyback plan last week. All things being equal, $100 million at Friday’s closing price of ~$14 equates to roughly 7.1 million shares, or an estimated 28.5% of the average numbers of total outstanding shares at the end of Q4 (25.06 million).

Chairman and CEO of Comtech said:

Authorizing the use of our strong balance sheet for share repurchases demonstrates our confidence in the underlying value of our stock and our commitment to providing long-term value for our stockholders.

The Comtech/Gilat deal is a classic case of an acquisition gone bad where, in the interim, neither company is benefiting more than the lawyers handling the legal battle. That said, Comtech is trading is at considerably less than a 10x multiple on EBITDA – as though it was a company in decline. Yet if one disregards the short-term legal expenses, the company expects to grow EBITDA this year without the acquisitions. Meanwhile, the fast-track legal decision is expected to come before the end of the month. Either the deal gets done (and remember, Comtech expected it to be accretive), or it doesn’t get done (and the market should give back what it took away). In either case, it would seem as though the stock has been punished much more than the legal fees rationalize. Even if the legal fees and acquisition costs double to, say, $50 million by the time it’s all over, that’s a short-term one-time expense that equates to ~8% of annual revenue. Yet the stock is down 60% this year. My guess is that the deal with Gilat gets done, but at a renegotiated price – something perhaps half-way between the original $10.25 agreement, and Gilat’s Friday close around $5.25.

Either way, Comtech is a BUY because it has been so badly punished by the market. CMTL could easily trade back up to $20/share – 50% higher than Friday’s close, but still down 30% from where it started the year. Without Gilat, even at $20, the EV/adjusted EBITDA ratio would be an estimated 8.6x, still a relative bargain, in my opinion.

Additional disclosure: I am an engineer, not a CFA. The information and data presented in this article were obtained from company documents and/or sources believed to be reliable, but have not been independently verified. Therefore, the author cannot guarantee their accuracy. Please do your own research and contact a qualified investment advisor. I am not responsible for the investment decisions you make.