Based in Kansas City, Missouri, Commerce Bancshares, Inc. (CBSH) is a $30.5 billion asset holding company and parent to Commerce Bank. CBSH has a rich history of lending to the Midwest for more than 150 years. It currently operates a little over 160 branches with serving its local markets located in Colorado, Illinois, Kansas, Missouri, Oklahoma and Texas.

To me, CBSH is a bank that you would want to own in the beginning of a recession and but not necessarily today. Since the bank has a solid net interest margin and operating expense base it is typically more profitable than the average peer bank, and because of this has a that valuation is typically higher than peers. As one can see from the chart below, it currently trades at ~2.2x price to tangible book value per share.

While I do think that CBSH has a great mouse-trap, the current valuation is too today in order to have material upside tomorrow. I think credit could potentially more of an issue, but should not be a limiting factor today. In short, I think peer banks are likely to perform better.

Throughout the second quarter, CBSH grew loans by a little more $1.3 billion. Given the diverse lending portfolio, there were some obvious puts and takes to comprise such growth, namely PPP loans, which accounted for nearly all the net loan growth. In the quarter, residential mortgage also grew $190 million along with commercial real estate, to the tune of $108 million. Personal credit cards were down a little more than $60 million, which should be viewed as a positive since they typically carry the highest loss rates in a recession. 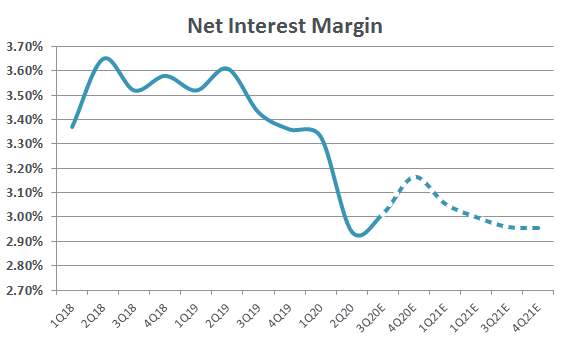 While the margin continues to hold up quite well, at least relative to peers, I see limited upside in the shares. I think this because the valuation is so much higher already. CBSH is a very solid operator, but shares didn’t fall nearly as much as peers in the early onset of the recession.

Going forward, I believe the margin is likely to stay roughly flat after the PPP loans are forgiven later this quarter. With a ~300 basis point margin, CBSH management should focus on smaller but more profitable growth. In the last quarter, it was noted that total loan growth was aided by residential mortgage loans being put on the balance sheet (rather than being packaged and sold). While this helps growth in the near-term, it limits NIM upside since the typical 30-year mortgage is close to 3% today.

When I think about the credit profile I always do so in terms of comparing the bank to its sibling bank, UMB Financial (UMBF). When reviewing them against one another, it’s pretty easy to see the stark difference. CBSH takes a little more credit risk, but is rewarded with a stronger NIM. However, today’s valuation leaves little upside, in my mind, since CBSH has historically had a near-peer like net charge-off ((NCO)) history. Throughout the past economic cycle CBSH had a slightly better than average performance, but today it trades at sizable premium to peers. 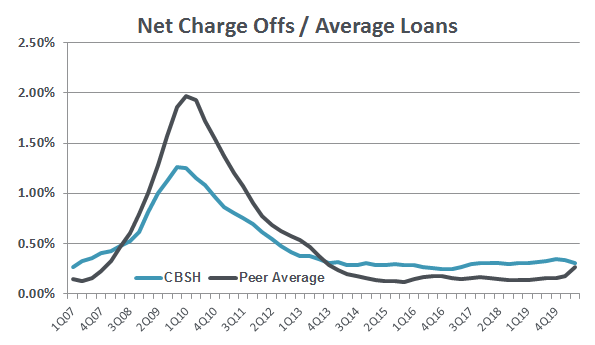 The second quarter NCOs were $8.4 million, which adds up to being 0.21% of the loan portfolio. This compared to $11 million in the first quarter, or 0.30% of loans. When comparing CBSH to peers, the NCOs seen don’t really persuade me into believing that credit quality has improved beyond the “average” bank. CBSH does take more risk, so on a relative margin it is better, but when thinking holistically, I would expect future charge-offs to increase and be in line with peers. While this is unlikely to cause negative earnings, I do question why the valuation premium to peers is so pronounced. 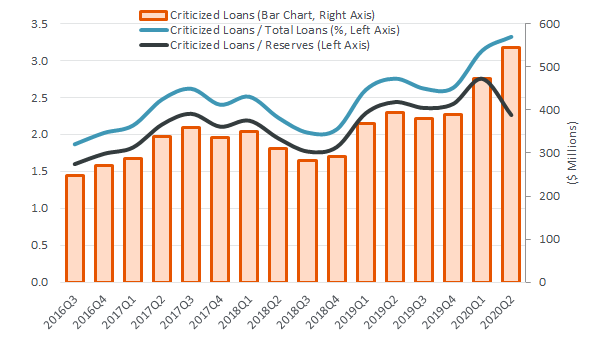 What concerns me the most about CBSH is the share price premium relative to the slight credit deterioration. As one can see from the chart above, criticized loans continue to inch higher quarter after quarter. While I do think that management took the correct steps by adding to the loan loss reserve in the second quarter, the continual climb in criticized loans leads me to believe that future NCOs are likely to climb.

While I would be the first to agree with the thought that CBSH is better than the average regional peer, it’s hard to get excited about the current share price relative to its operating fundamentals.

While there are no glaring pitfalls, I do believe that profitability is likely to be a little more muted until the end of the years because of this heightened level provision expenses. From there however, even though I am expecting sizable earning growth next year (relative to this year), the current valuation implies that credit should be pristine and earnings growth should start today, not in six months.

To me, the bottom line is this: I like the bank and its operations, it is clearly more profitable than other banks. I think this management team is far better than most peers, although slightly less seasoned. From a valuation perspective, I think the bank is fairly valued leaving limited upside from its current price.

Fashion
We use cookies on our website to give you the most relevant experience by remembering your preferences and repeat visits. By clicking “Accept All”, you consent to the use of ALL the cookies. However, you may visit "Cookie Settings" to provide a controlled consent.
Cookie SettingsAccept All
Manage consent