Jeff Miller, over at A Dash of Insight, posted this missive this weekend questioning whether investors should change course over the President’s COVID-19 diagnosis?

The other question asked in Jeff’s piece this weekend, found lower in the article, is what is the penchant for violence given the increasing tension over the Presidential election and the first debate? Per Jeff’s source, quoted in the article, the risk remains low of post-election violence. Jeff also takes readers through a number of post-election scenarios. The article is well worth the read.

There seem to be too many different types of risks developing around the Presidential election: the risk of an undecided outcome like Bush v. Gore in November 2000 when – per a Bespoke missive – the S&P 500 fell 5% prior to the Supreme Court ruling for Bush 43. However, the mitigating circumstance in that election was that the Nasdaq and large-cap tech stocks had begun to unravel prior to the election. The point being the “attribution” around the 5% S&P 500 correction in November 2000 could be partly politics and partly fundamentals.

My own best memory of that time was Cisco’s (NASDAQ:CSCO) earnings report and conference call shortly after the Presidential election in November 2000, where John Chambers raised Cisco’s guidance on the call, the stock rallied for day or two, and then promptly turned south. John Chambers had to retract that positive guidance in the February ’01 conference call and, in fact, lowered guidance, but by that time the wheels were coming off the cart in terms of the large-cap growth and tech stock trade.

Remember, the stock market is the best leading indicator you/we have as investors. Don’t ignore “the message of the markets”.

There was very little pushback received on this recent blog post on “average, annual” returns. I took a look at various long-term returns for the S&P 500, showing how in the near-term, the S&P 500 looks overvalued while the “average, annual” return from January 1, 2000, and even January 1, 1990, show that annual returns remain well below the long-term S&P 500 average of 11%-12%.

Maybe Paul Hickey is reading this blog, since this weekend in the excellent weekly Bespoke Report (dated October 2nd, 2020) Paul noted the following regarding annual returns for the S&P 500: 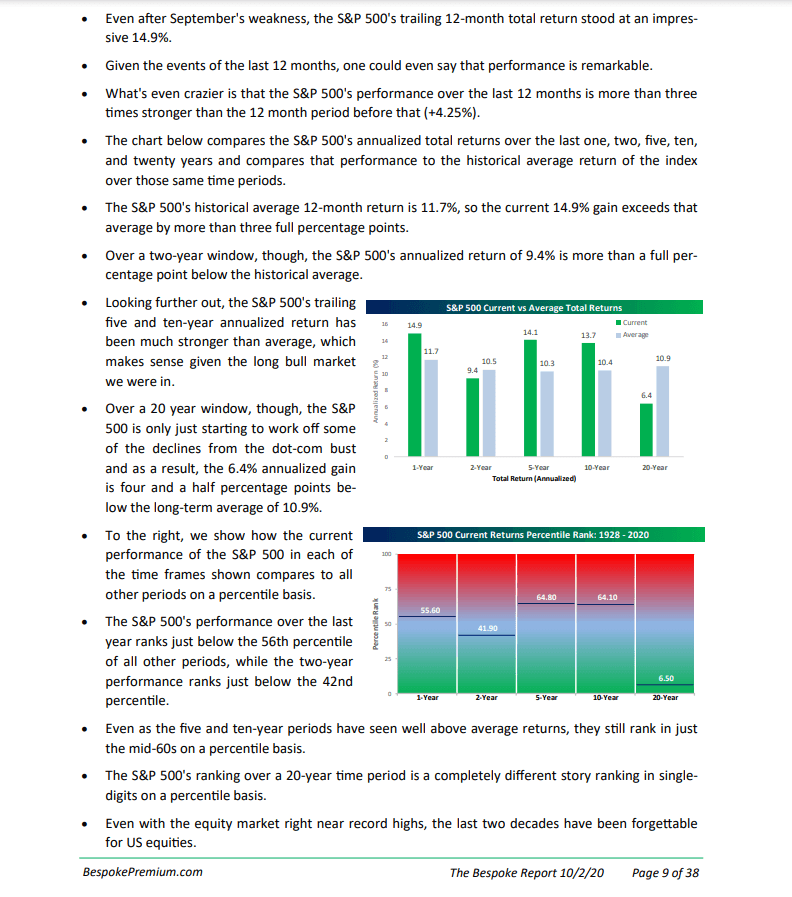 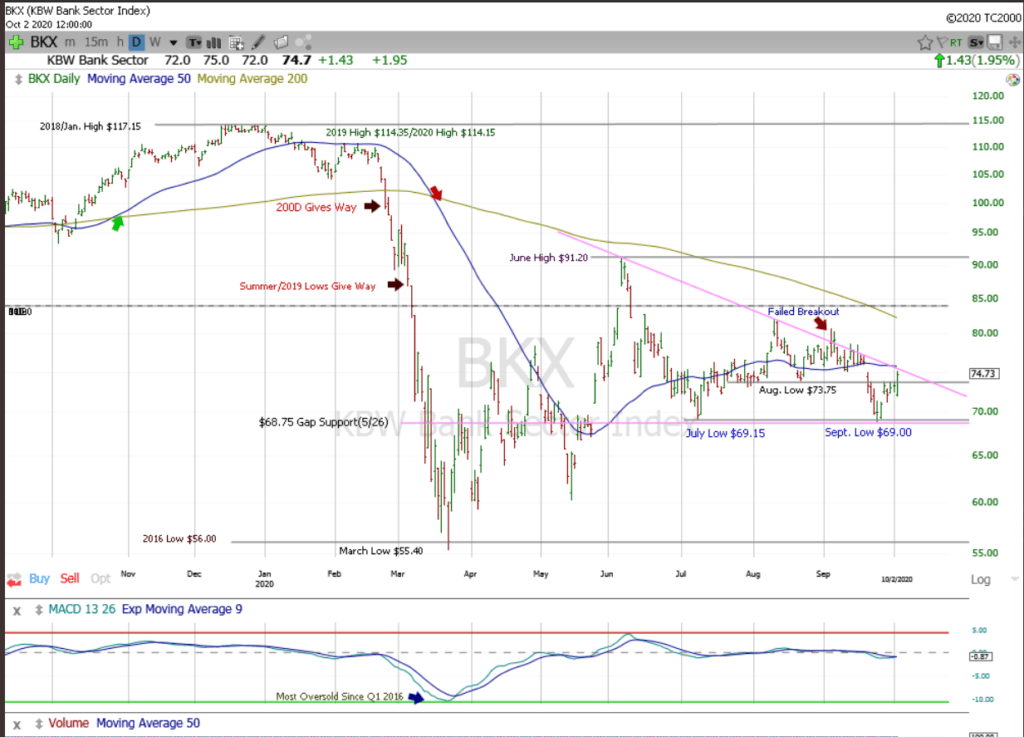 Financials are the 2nd worst performing sector year-to-date, down 21%, exceeded only by Energy’s YTD return of -48%. (Return source: JPMorgan’s Guide to the Market.)

Personally, I still think Financials in general and bank stocks in particular are more “value” than “value trap” but more patience will be required.

Last week, the Fed stated that they are still prohibiting stock repurchases through the 4th quarter of 2020, in order to ensure that banks maintain the appropriate capital positions as the pandemic and the various shutdowns continue to impact small business. 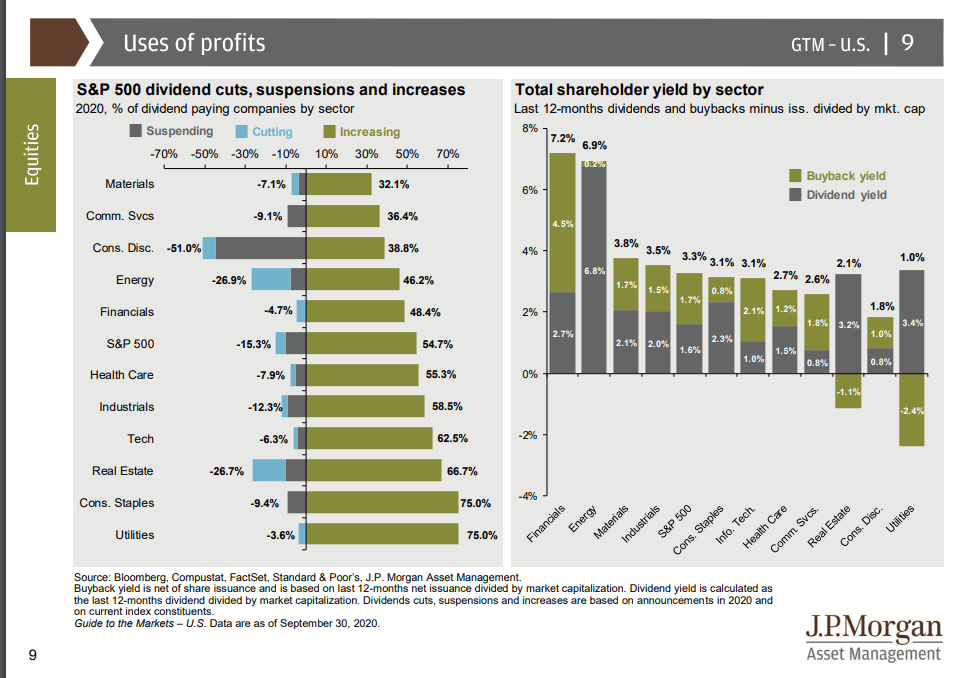 What complicates the picture is that expected consumer credit losses for the 3rd quarter, which could be greater than the first or second quarter, will be revealed starting next week, October 12th, as the big banks and financials start to report their 3rd quarter earnings.

This blog is not typically for insurance company investors, but we do own JPMorgan (NYSE:JPM) and Schwab (NYSE:SCHW) as top 10 positions, as well as some Bank of America (NYSE:BAC), but as a smaller weight.

In the coming 3rd quarter earnings releases for banks and Financials, the key metric to watch will be credit losses at the consumer level and whether the expected losses for 2020 expand further. The fact that Congress is dragging their feet on further stimulus will likely have some impact on 3rd quarter consumer loan losses.

The net interest margin contraction that began for the banks in March 2020 has mostly worked its way through the system. We’d need to see yield curve steepening to start to fix this margin pressure and it would likely have to last a few quarters.

Summary/Conclusion: It’s another dry week for S&P 500 earnings releases, but the fireworks really start once again in the week of October 12th, 2020 when the big banks and many financial companies kick off 3rd quarter earnings.

Thinking about longer-term S&P 500 returns, the penchant is to be bearish given the 5-month rally from late March to late August 2020, but looking at longer-term returns, particularly the 20-year and 30-year “average, annual” S&P 500 return, the actual returns remain below the long-term averages.

Higher interest rates could fix that in a hurry, meaning any increase in the 10-year Treasury yield would likely keep a lid on S&P 500 returns for the intermediate future.

Individual investors tend to forget the Fed only has direct control over the fed funds rate, while market forces determine the yields across the rest of the Treasury yield curve.

According to the data tracking done for this blog, the “10-yr Treasury yield – 30-year Treasury yield” spread ended 2020 at its highest spread of 79 basis points (week ending spread that is).

Taking everything you read here with a substantial grain of salt, and with great skepticism. One thing about capital markets, they can change in a hurry.